Remembering the Animals Who Served in the First World War 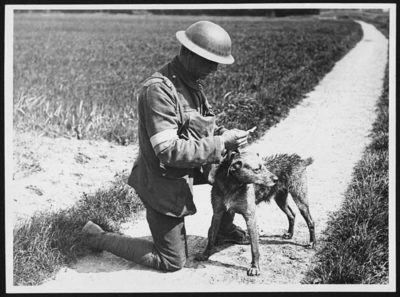 Approximately 9 million animals served in the First World War (some estimate more). Like human soldiers, they faced the horrors of trench warfare, artillery fire, rough terrains, cruel weather, disease, and starvation. Veterans would go on to say that the animals’ strength, skill, intelligence, and loyalty influenced the success of the Allied war effort. Some would also say that the animals they served with became extensions of their own being.

It seems impossible to imagine our pets serving as these unsung heroes did—that’s because these brave animals changed how we viewed and treated them after their service. Tomorrow is Remembrance Day; let’s take a moment to acknowledge WWI’s furry and feathered soldiers and what connects them to our family pets.

How these animals served the war effort

Equine
Horses, donkeys, and mules represented the most significant animal contribution to the war effort by far—it’s estimated that 5-6 million served in WWI.

Horses are best known for their service in the cavalry, galloping into battle on the front lines. Most notable, however, was their draught work—pulling heavy wagons of artillery, supplies, lumber, and injured soldiers. Heavy and light horses were used for different roles, but the Percheron exemplified the ideal draught horse for its strong neck and quarters, shorter legs and back, and intelligent, calm nature.

Mules are horse-donkey hybrids. Compared with horses, their hybrid qualities make them capable of doing more work on less food and more resilient against disease and injury. Mules were valued for their ability to traverse rough terrains, such as mountains and cliffsides.

Like mules, donkeys were also helpful in the mountains but could tolerate higher temperatures, and because of their smaller stature, they were commonly used in the trenches.

Canine
Large breed dogs were also used for draught work; for example, the Belgian Mastiff, known for its superior strength, and the Maremma Sheepdog, capable of working in freezing cold mountains. German Shepherds, Doberman Pinschers, and Airedale Terriers were famous for carrying messages and medical supplies. Their superior senses of smell and hearing made them essential in search and rescue endeavors.

Medium breeds, such as Collies, carried messages and supplies and aided in search and rescue. Border Collies, for example, are very trainable, fast, and athletic, and because their coats are mostly black, they are almost invisible at night. When surrounded by the enemy, the Border Collie could escape and carry messages for help.

Rats were everywhere in the trenches, spreading disease and destroying supplies. The US Army utilized small mix-breed terriers as “ratters”, using their hunting nature to remove rodents from the trenches. Additionally, they provided much-needed companionship to the exhausted and overwhelmed men who would stay in the trenches for up to six days at a time.

Avian
Telephone communication wasn’t always possible during WWI, so pigeons stepped up as the next best thing. Pigeons can fly about 75mph and cover about 300 miles in a single trip. They were essential in carrying messages between command centers, the battlefield, and troops at sea. European and American forces employed an estimated 100,000 pigeons—their delivery success rate was 95%!

Ever heard the phrase “canary in a coal mine”? Canaries are 15 times more sensitive to gas than humans and, during WWI, were used to warn troops of the presence of gas before it could cause any adverse effects. Canaries and other songbirds were also often kept by soldiers as morale-boosting pets with their uplifting melodies.

Other animals served in the First World War, including cats, goats, and non-working dog breeds. Many of these animals were homeless, often displaced strays, and adopted by soldiers. Some performed tasks, but most were valued for their companionship, many becoming mascots.

How the animals of war serve the animals of today
For thousands of years, most domestic animals were used for work and war and were often considered disposable. Veterinary care was available but not regularly sought for sick and injured animals. The animals who served in WWI were so vital to the war effort that they were widely identified as indispensable. Animal welfare organizations, such as the Royal Society for the Prevention of Cruelty to Animals (RSPCA) and the Blue Cross, were essential in caring for sick and injured war animals and, in doing so, raised public awareness of animal suffering in the press. Advantageously, this:

“My prayer is that what we have gone through (World War One) will startle the world into some new realization of the sanctity of life, animal as well as human.” – Christopher Morley, author of the poem, On Vimy Ridge

Note: This article, written by LifeLearn Animal Health (LifeLearn Inc.) is licensed to this practice for the personal use of our clients. Any copying, printing or further distribution is prohibited without the express written permission of Lifelearn. Please note that the news information presented here is NOT a substitute for a proper consultation and/or clinical examination of your pet by a veterinarian.